Who are you inspiring?

­
Often, while I am out on a long training run, I reflect on things for which I am grateful. I always seem to think of how I started endurance running.

I feel such gratitude it is overwhelming. I thought I would share my story and hope you share yours, as well!

It was 2000, I just finished up my freshman year of college and was in a pretty crappy state of health. I had gained 20 lbs due to a recent seizure disorder diagnosis & new medication and also was a smoker. I had stopped exercising except for our cheerleading practices a few times per week.

My friend, Molly* was always hassling me to run. I would always refuse.

Molly* was a former cross country state champion and I knew I  would never keep up with her. There was no way I was going to put myself through the misery of running especially with a cross county super star. 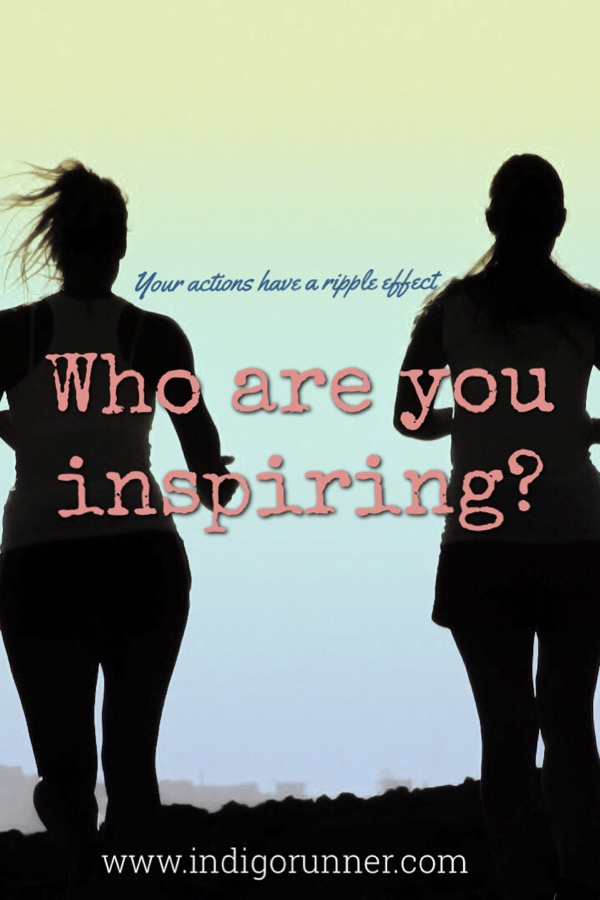 One day I caved to her urges. I’m not sure what finally did it. Perhaps I was tired of the prodding or tired of feeling cruddy. Molly* was so patient with me. She would cheer me on when I gasped for breath and would walk with me every 1/4 a mile or so when I had to stop.

I decided to set a big audacious goal: I would run the entire 2.5 loop at the park near my apartment.

Painfully slow, Walkman in tow with Britney Spears’ “Stronger” jamming in my headphones, I was able to run further and further each day. Over that summer, I started to feel a shift. I was beginning to enjoy the way running made me feel, both inside and out.

As I worked towards my goal, I would run as far as I could until my lungs burned and body ached. I would walk until I could run again. That’s how I trained the entire summer. I was doing the Galloway Method and didn’t even know it! Sure enough, by the time fall rolled around, I was running 2.5 miles straight. Something I never thought I’d be able to do.

Running became my meditation, my therapy. That 2.5 mile loop was my sanity loop in college. If I had a bad day, fight with my roomies, overwhelmed with school, that loop was my serenity.

Over time I lost touch with Molly*. I wish she would have had known influence and impact she has had on my life. I often think about her on my training runs and wish I could tell her how much she inspired me.

I mean, think about it. Almost 2o years later and I AM STILL  running all because 1 person inspired me.

Running has got me through some tough times, been my celebration, helped me lose baby weight, and turned into my meditation.

Running has changed my life in ways I could never imagine and it was because just one person inspired me to run.

Such an incredible ripple effect, right? All because of 1 person touching my heart. Just when you feel insignificant, think of all the people that you speak to about running, watch you lace up everyday and go out for a run. Pretty powerful, huh?

YOU COULD BE INSPIRING SOMEONE TO RUN AND NOT EVEN KNOW IT. YOU MAY BE IMPACTING OTHERS IN THE SAME WAY YOU WERE ONCE INSPIRED.

It doesn’t stop with running, either.

Every action we take, word we speak, and smile we make can have a ripple effect. You never know what kind of impact you are having on someone.

Your words and actions are like pebbles in the water. At times they may feel insignificant, but they can have a ripple effect that can last a lifetime.

Go out there lace up those running shoes. You never know when someone else is watching & wanting to change.

Until next time, be the change~