Diabetes Mellitus: What It Is & Why You Need To Know About It

Chances are, you know someone affected by Diabetes Mellitus. In 2012, according to www.diabetes.org, 29.1 million or 9.3% of Americans had diabetes. Of that 29.1 million, 21 million were not diagnosed.  In 2013, diabetes was listed as the 7th cause of death.

As a health and wellness advocate, it’s frustrating to read these statistics because the complications from diabetes can be controlled with proper health and wellness. Study after study has shown that there is improved glucose tolerance in those who employ a consistent healthy diet and exercise routine.

Diabetes Mellitus is disorder of insulin availability and is not just one disease. There are 4 clinical classifications of the disorder.

What are the early symptoms of Diabetes Mellitus?

In type 1 Diabetes and LADA the symptoms can manifest as extreme thirst, weight loss, and frequent urination. In addition, you may become shaky and fatigue (these are all signs of high glucose levels). Another sign that my husband specifically had was cramping-like charlie horse pain in his calves due to electrolyte imbalances. Typically, the individual is slimmer and a significant weight loss is a red flag that something is going on. 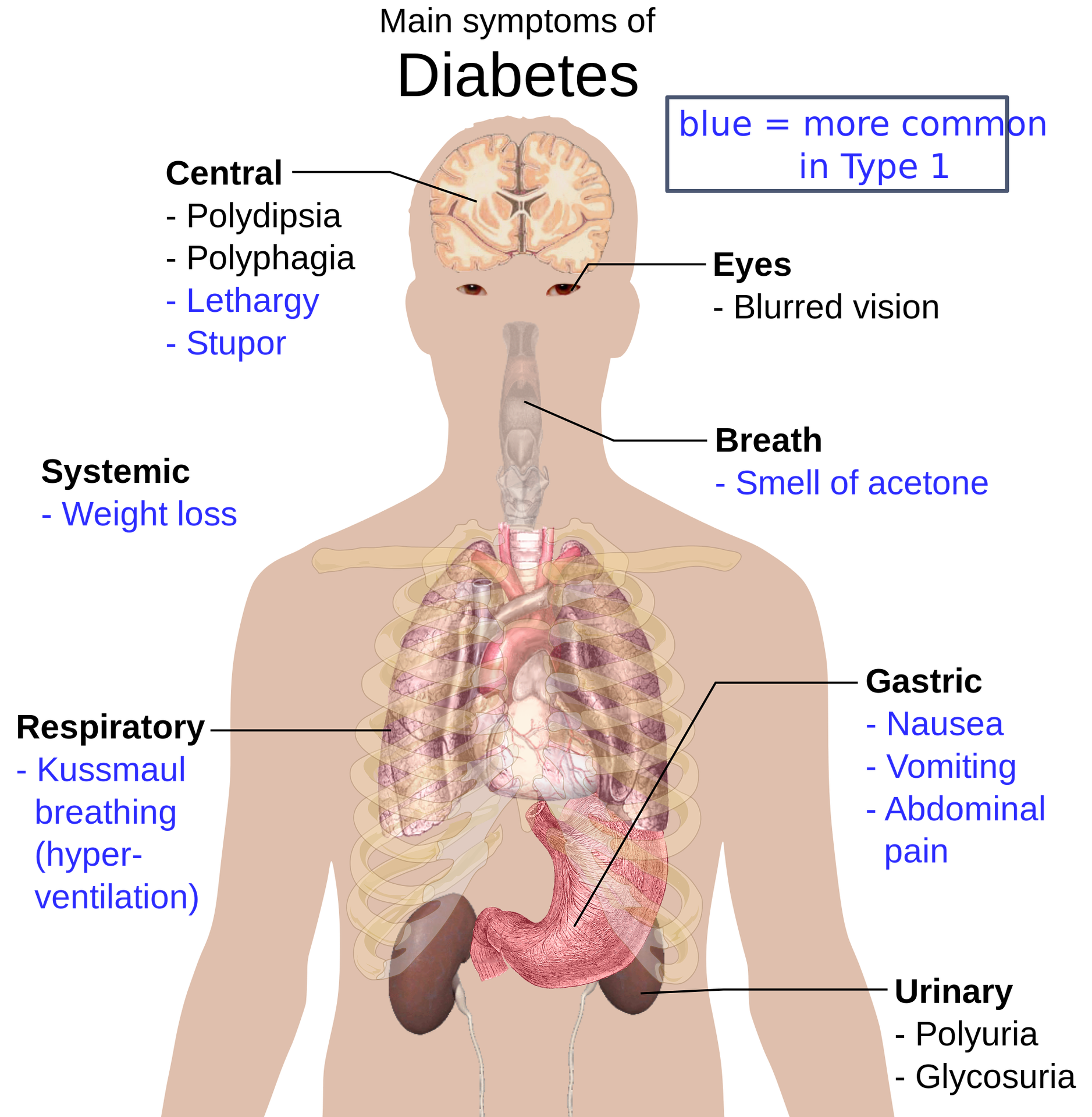 In type II Diabetes, the individual will have similar symptoms as type I, such as the thirst, fatigue, and frequent urination. However, the individuals diagnosed with Type II often have a higher BMI.

What are the long term complications of poorly controlled Diabetes Mellitus or blood glucose levels?

The complications of poor diabetes management goes on and on. Not properly managing glucose levels can lead to dizziness, eye problems, heart disease, hypertension, gut problems, kidney problems or even failure, sensory and motor function problems, and infections due to poor wound healing.

Poor glucose control can affect almost every system in your body. It is so important you check your glucose per your doctor’s orders (even if you’re feeling well!).  Take your medications as prescribed, eat a healthy diet, and see your doctor regularly. Being proactive in your diabetic maintenance is important in preventing complications.

Why should we care?:

This is such an important disease. I suspect we all know someone that has been affected by Diabetes Mellitus. It’s not going away either. With obesity on the rise, most agree Diabetes Mellitus will also be trending the same.

When we are more mindful of bodies and what we put in them, however, we can avoid this disorder. This is NOT a disease that is inevitable with the aging process. With proper nutrition and exercise Diabetes Mellitus can be avoided or managed.

Please stay tuned for my next week’s post where I will interview,  Andy Grider, (my husband) who was diagnosed in April with “Latent Autoimmune Diabetes of Adults”. He will talk to about how his diagnosis affects him, how he was proactive in the management of the disorder, and how he maintains a new healthy way of living. It was truly inspiring watching him take control of this disease.

Until next time….Be the Change

Finally did it. Got my first tattoo. I never reall

The day will come, the sun will rise, and we'll be

Have you thought about running in a 5k, 10k, half

When nothing is owed or deserved or expected And y

What might have been lost don't bother me. Bon Iv

Life is a balance between holding on and letting g

A stumbling block to the pessimist is a stepping-s

Going to plant a weeping willow On the banks green

It might be over soon, soon, soon Where you gonna

And at once, I knew I was not magnificent ✨ ❤

5 miles to wrap a relaxing day 😎 Took an IG pos

“Keep your face towards the sunshine and the sha

3 easy miles before heading into another 12 hr shi

Hike with the littles!! Rest day for me😎 back a

Skipped my evening run for a walk to Graeter’s w